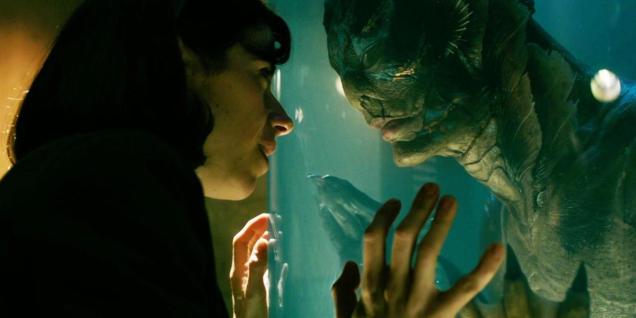 This film is like the adult version of Stephen Spielberg legendary film E.T with deeper ideas and magical presentation with perfection to each detail. Guillermo del Toro really nailed it.

The film end to end is like a beautiful painting that keeps telling you an endless story about love, acceptance, real friendship, inner beauty and those who feel they are totally invisible in a world that force you to be everything but yourself.

Set in the sixties of the last century, in a high-security Government laboratory, a mute night shift cleaner Eliza (Sally Hawkins) makes a connection with an amphibian creature captured in a tank to be studied and used for the US/Russian cold war purposes.

Sally Hawkins played her career changing role. She came across exactly how she was described in the movie like a poet, to me she was more like a moving river.
While all the characters where written very well, she has added her beautiful touch to the role displaying all sorts of emotions without having to speak.

The other two beautifully played characters are Zelda who is Eliza friend, also a cleaner in the facility (played by Octavia Spencer) and her neighbor and friend Giles (played by Richard Jenkins) both in my opinion did an amazing job. Octavia Spencer was nominated for the Oscars in the category Best Actress in a supporting role and she totally deserves it. I also thing Richard Jenkins deserves to be nominated in the same category for you can totally emotionally connect with him.

There is also perfection in the production design, cinematography and music. When watching it makes you feel and smell each corner or place of each scene …. It is very impressive.

The only one big down for me was the film failed to clearly portrait the amphibian creature as just DIFFERENT as appose to an animal or half human. All previous films around the same narrative such as E.T., The Beauty and the Beast or even Arrival makes it very clear that the other is only different but is at the same level of humanity as humans. In this film since the Director/Writers chose to take the relationship to a sexual level then this particular point becomes even more crucial. Nevertheless, the film remains to be so beautiful.

The film was nominated for 7 Golden Globes, 12 BAFTAs and 13 Oscars and I think it deserves every single nomination although personally I would have given the award of best picture to either Dunkirk or The Darkest Hour.